This model has been discontinued by Cecotec and replaced by the new Cecotec Mambo 10070. It costs the same and is much more cool 🙂

The Cecotec Mambo 8090 Kitchen Robot is located in the Mambo family in its high range. It is an innovation compared to the Mambo 6090, Mambo 7090 and is one step away from the Mambo 9090. In our opinion, this Mambo 8090 is emerging as one of the best quality / price Kitchen Robot on the market, only surpassed by its “big brother” the Mambo 9090, thanks to its non-stick ceramic jar that allows us to make very, very special recipes. Very demanding. However, for 90% of the kitchens this Mambo 8090 has a high quality stainless steel jug, sufficiently non-stick for almost all recipes that we can think of and for this reason it is configured as the most interesting high-end option if not we want to assume the premium of the top model 9090.

This Cecotec 8090 Kitchen Robot includes the provisions of the previous models. However, it should be noted that it has full compatibility with a dishwasher, a steam basket and, best of all, a built-in scale. This greatly facilitates cooking and food processing tasks, always obtaining impeccable results. With an intuitive digital control panel and 30 cooking and food processing functions, the Cecotec Mambo 8090 Kitchen Robot allows you to innovate and provides you with real help in the kitchen.

To see it better, and before we start, we leave you with a simple table where you can see the similarities and differences with the rest of the kitchen robots of the Mambo family. To the mess!

As always, we leave you with a short video where you can see the main characteristics of this little gem. Inside video!

Regarding the price of this Kitchen Robot, we advise you to value several options. There is the famous Marketplace where you can find a good price, or you can directly buy it in the manufacturer’s store (many times for the same price). Buying it in the Official Store has the advantage that by buying it directly from the manufacturer and there are no intermediaries, it simplifies and speeds up everything in terms of spare parts, guarantees and in general any after-sales incident. In addition, sometimes it is possible to find it even at the same price in the Official Store, which together with the guarantees it offers is a great advantage, but that is your decision!

The jar of this Cecotec 8090 Kitchen Robot has a capacity of 3.3 liters, one of the largest in the robot market, and has a power of 1700W. With this you can prepare four or six servings (or more depending on the recipe) and then freeze.

The jug is made of high-quality stainless steel, and its accessories are coated with silicone to avoid damaging the surfaces.

The Cecotec Mambo 8090 Kitchen Robot is a true kitchen worker, capable of processing and cooking food in practically all its forms, to make a wide variety of recipes in the kitchen with the best results. The large capacity of the jug stands out, so it can cook for many diners, as well as the incorporation of a precision scale. Among its main characteristics are the following:

Versatile, easy to use and very intuitive, there is no recipe or food cut that can resist you. You will save considerable time in the kitchen, and also the use of other utensils, to make cooking tasks as easy as possible. Among its main advantages, the following stand out:

For those who are more demanding in the kitchen, they still miss Wi-Fi connectivity to make guided recipes.

The Cecotec Mambo 8090 Kitchen Robot is the perfect kitchen appliance for people with many family members, or who have to cook often for guests, due to the large capacity of its jug. In addition, the possibility of cooking up to 4 dishes at the same time is a plus so that the variety reaches the table, with freshly made dishes. It is easy to use and very intuitive, thanks to its touch screen. A great advantage is that you can cook stews in a traditional way, with its SlowMambo function. And with its thirty cooking and food processor functions, it’s a real help in the kitchen.

If the Cecotec Mambo 8090 Kitchen Robot is not what you were looking for, you may be interested in taking a look at its “big brother”, the Cecotec Mambo 9090 Kitchen Robot , which includes similar cooking functions, but also incorporates a great novelty : its Havana model jug, with ceramic coating, which provides greater resistance and useful life for its continued use in the preparation of cooking recipes. 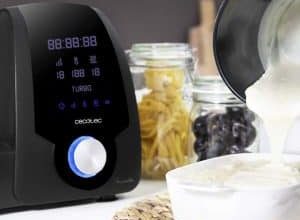 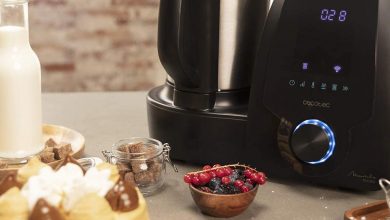 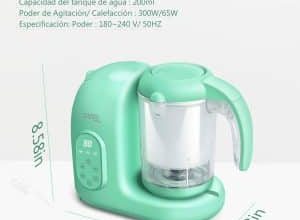 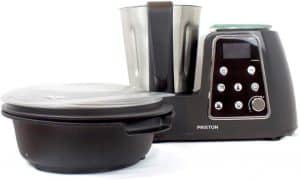