In every country in the world there are things that differentiate it from the rest, such as customs, folklore, music, language and food. This article is about the latter; Knowing the gastronomy of a country and the traditions around it is a very good way to get closer to the culture of any region, in this case, Holland, Netherlands. This country is well known for its bicycles, historical places, tulips, windmills, cheeses and beers; But in Dutch gastronomy there is much more than rich dairy and fermented drinks, typical Dutch dishes are usually made up of fish, potatoes and sausages, with a particular influence from Indonesian cuisine. Next, I will name you and describe some of the Dutch recipes that you may know and others that you do not.

Very popular in bars and restaurants, bitterballen are mainly an appetizer consisting of cut beef and cooked with meat broth, herbs, flour and butter, with which they form small balls that are breaded with a crust of crusty bread to be fried. The common thing is that they are served together with a sauce as a dressing, mainly mustard, and they are highly requested in restaurants and pubs to pair with beer.

They are the Dutch version of American pancakes. These are characterized by being significantly flatter and with greater circumference. For the natives it is common to eat Pannenkoeken at any time of the day and it is not unusual to see them accompanied by smoked salmon or raw meat.

They are versatile in Dutch cuisine, they can also be served as a dessert or a snack when accompanied with some fruit and chocolate syrup. Although traditionally eaten with a fairly thick maple syrup.

You will very easily see it during the Dutch winter. This is a stew that abounds in restaurants and homes during the coldest time of the year, which is prepared with a wide variety of ingredients, among them, and the most traditional, cabbage, sauerkraut and smoked meat. Likewise, it is very common to add some of the typical Dutch sausage, Rookworst.

This is a dish that is considered more Indonesian than Dutch, but it has earned an important position in the food of the Netherlands thanks to its great consumption and how much the Dutch love it. The adoption of this dish by Dutch gastronomy has a lot to do with the colonization of Indonesia by the Dutch.

It is made up of white rice as a base, which is accompanied by several small dishes prepared with eggs, legumes, pickles, meats and vegetables.

As in the bars with bitterballen, in the streets the most popular dish is haring. This recipe is basically a tapa or sandwich that is prepared with herring, which is typically accompanied with diced onion and slices of pickles.

The street fish stalls, known as haringhandel, offer these tapas throughout the year, but undoubtedly their greatest presence is during the herring season in the Dutch monitor.

In another version of this dish, herring is replaced by pieces of smoked eel.

Originating in the city of Gouda in the 18th century, this famous large cookie, also known in much of the world simply as “Wafels”, is a very popular snack or dessert in the Netherlands. Getting them is very easy, thanks to the fact that they abound on the shelves of supermarkets and street food stalls during a festival or in an outdoor market.

This croquette is one of the most famous Dutch snacks. Basically it is meat in small pieces, stewed and breaded for frying, which is used as a filling for a bun. The most typical recipe uses beef, but currently you can get the Kroket made with chicken, shrimp, goulash and even grains in its vegetarian version.

They are commonly seasoned with mustard, and are so popular that you can even find them at a Dutch McDonald’s.

In Dutch gastronomy this is the most famous soup. It is prepared with peas and it is common to see that it is consumed at night, as dinner.

They regularly eat it accompanied by sliced ​​sausage, which makes it a fairly complete and satisfying dish.

Rookworst is the iconic Dutch sausage, it shares a certain similarity with the Frankfurt of German origin and has a very pleasant taste with a crispy skin. It is very common for it to be served in some dishes that I mentioned earlier, such as Erwtensoep soup and Stampoot stew, but you can also get it in any super market or in a food stall where they serve it inside a bun with a little mustard.

Also spelled as “Genever”, this is a very iconic drink from Holland. The tradition of drinking this juniper-flavored gin-like liquor dates back to the 16th century, when it was prescribed for medicinal purposes. You can find it in almost any bar or distillery within the Dutch territory.

Like its neighbor Germany, the Netherlands is very popular for its beers, and there is no better proof of this than the fact that the origin of some of the world-famous brands, such as Heineken and Amstel, is Dutch. But beyond that, for the Dutch, beer is a symbol of their culture and traditions, it is the companion of many dishes and the drink of choice in many celebrations. In addition to the brands that I mentioned, it is worth tasting some craft beer that you find in any of the Dutch bars and pubs.

For the inhabitants of the Netherlands, it is very common to eat overflowing and fried fish accompanied by a sauce as a dressing, it is similar to the fish and chips of the British, but this does not have chips. The name of this dish is Lekkerbekje, although you can also find it as Kibbeling, which refers to the type of fish used, which can be cod or whiting, respectively. 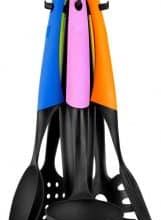